Bobi Wine is this morning expected to appear before the media crimes division of police at CID headquarters in Kibuli.

Kyadondo East Member of Parliament Kyagulanyi Ssentamu, alias Bobi Wine is this morning expected to appear before the media crimes division of police at CID headquarters in Kibuli.

According to a letter written by Dale Johnson, the CID commander Kampala metropolitan police, and seen by Howwe.Biz, Bobi Wine is to respond to appear at 10am to record a statement on allegations of incitement of violence contrary to section 83 of the penal code act.

He allegedly committed the crime on the 15th of October 2017 at Busaabala beach, Busaabala Zone A Makindye Sabagalo, Wakiso District. 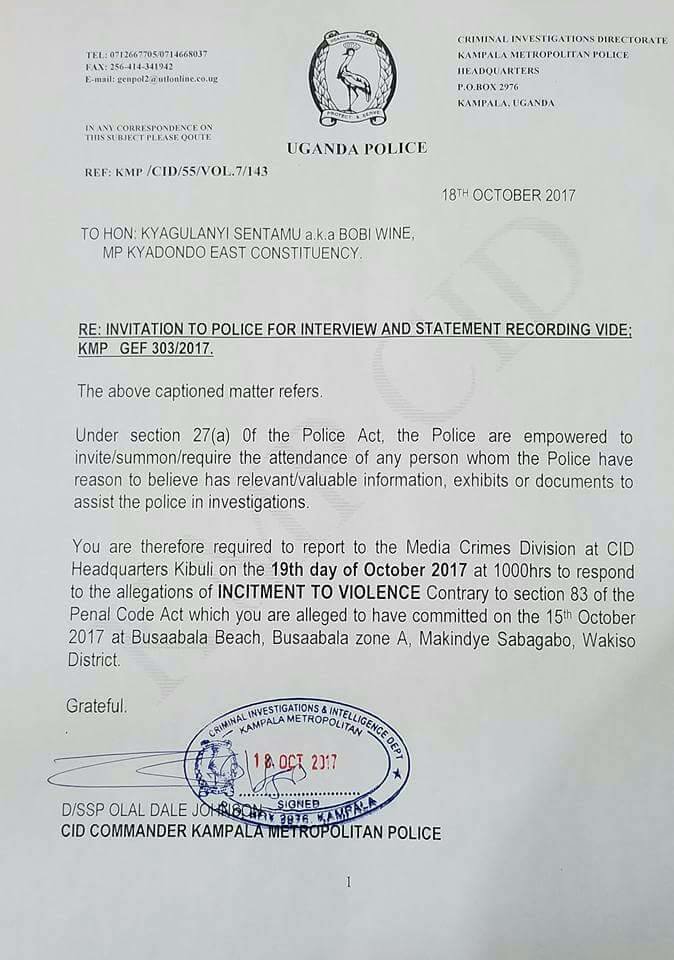 Three people from Kyebando have pinned Patrick Kiwanuka Kagimu for the murder of lawyer Susan Alweny.
Story by Mukama Evart
\ 1670242335

The incident happened on Saturday last week at the Youth Patriotism Symposium where Oledo went on his knees praising the president for honoring part of his pledge to raise doctors' salaries.
Story by Businge Brian Franco
\ 1670239397

The Deputy Inspector General of Police Major General Geoffrey Katsigazi Tumusiime has called for speedy repairs of faulty police vehicles to boost response interventions against the recent wave of criminality which involves attacks on security installation and personnel.
Story by Mukama Evart
\ 1669984116

Police at Nagalama have helped a mother deliver a child at their station. The mother who had gone to report a case of neglect and failure to provide by her parents during her pregnancy gave birth to a baby girl.
Story by Mukama Evart
\ 1669983828

Members of Parliament want the Ministry of Energy and Mineral Development to release a comprehensive statement on persistent power outages currently being experienced nationwide.
Story by Mukama Evart
\ 1669983046