Hui Renjie, 25, who purchased a Note7 in China that was deemed "safe" with a non-defective battery, claims his phone blew up Monday and burned two of his fingers and damaged his MacBook Pro in the process

Stop me if you heard this one before: A Samsung Galaxy Note7 exploded.

Hui Renjie, 25, who purchased a Note7 in China that was deemed "safe" with a non-defective battery, claims his phone blew up Monday and burned two of his fingers and damaged his MacBook Pro in the process, according to Bloomberg. 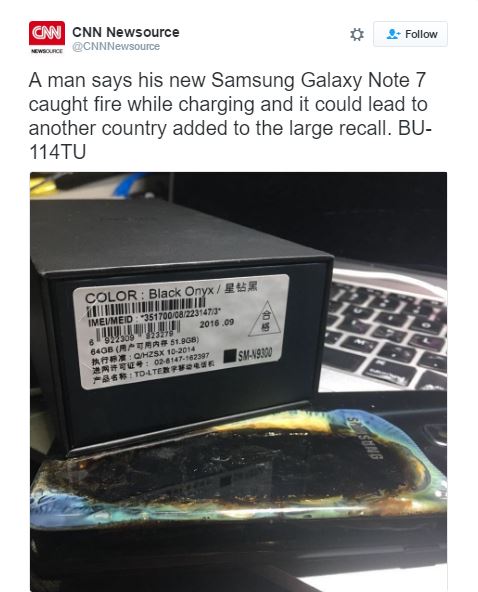 The phone was charging when it started to smoke, before bursting into flames, he said.

A Samsung representative visited Renjie to obtain the phone for investigation but he declined, fearing the company wouldn't reveal the real reason for the fire. Renjie told Bloomberg he planned to publicize the incident.

Renjie provided several photos, a receipt and a video (the latter two weren't published online) of the destroyed Note7 to CNNMoney, which you can see at the top of this story and below. 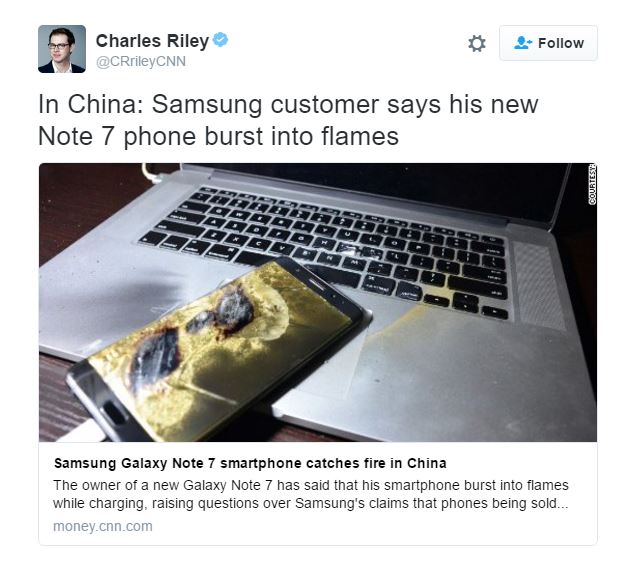 The black square on the lower right corner of the phone's box label indicates the device was "safe." Mashable plugged the device's IMEI number into Samsung's online Note7 recall checkerand it checked out as safe and provided the following: "Your device is not in the list of affected devices and is not subject to this recall. If you have any other questions please contact us at 1-844-365-6197."

There have been four reports of Note7 battery-related fires in China, according to CNNMoney.

Samsung issued a global recall a few weeks ago affecting up to 2.5 million Note7 phones sold following dozens of reports of phones bursting into flames; 1 million devices are being recalled in the U.S.

The global recall didn't include Note7 phones sold in China. Although Samsung declined to elaborate further as to what was causing the battery defects and, thus, phones to explode, it's believed the source is the battery supplier.

Recalled Note7 phones are believed to contain batteries produced by Samsung SDI, the company's battery division. Note7 phones sold in China reportedly have batteries made by China's Amperex Technology Limited. The different battery suppliers would explain why there were no initial reports of Note7 phones destroying themselves originating from China.

However, this new turn of events, could suggest otherwise, and puts into question the quality of even Note7 phones made for China.

It's not even clear if replacement Note7 phones are truly safe. Some South Korean consumershave complained about their replacement phones overheating and draining battery unusually quickly.

But Samsung trumpeted Monday that 90 percent of affected Note7 owners have opted to stick to the device by getting replacements.

If Samsung's made-for-China Note7 phones are also affected, this could spell bigger trouble for the company.

What You Need To Know About INFINIX HOT 7

Andela has announced that the company has secured $40M in Series C funding.
Story by Mukama Evart
\ 1507702240

Waragi could serve as a cheaper, sustainable clean cooking energy if home brewers were given better technologies of producing it, Scientists at Makerere University say.
Story by Howwe Editor
\ 1505209304

TIPS: How To Make Sure Your Data Doesn’t Get Depleted

Remember that the faster the speed, the more data bundles are utilised.
Story by Gee Mukama
\ 1500284242

Download this 3.2MBs to save you from typing Airtime Voucher code every time you recharging airtime in Uganda
Story by Mukama Evart
\ 1495809652

Mikolo is Uganda's first FREE wedding planning app and website, that can help you collate all your wedding to-dos on one platform.
Story by Amon Kintu
\ 1491337748